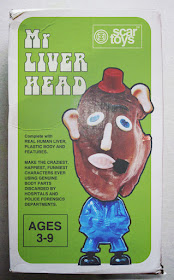 As part of its scheme to recycle human body parts (first outlined in "An End to Starvation?", Pelican Books, 1973), Scarfolk Council insisted that the region's NHS hospitals and police departments bolster their dwindling funds by partnering with commercial businesses. One such enforced collaboration was between Scarfolk Barber Surgeons Clinic, Greater Scarfolk Police and the ScarToys Company.

Surgical waste, such as amputated limbs, damaged internal organs and even excised tumours, was pooled with body parts accumulated by criminal forensics teams from the scenes of violent crimes. These were delivered in large trucks to ScarToys, whose development departments repurposed them into children's playthings with names like Snakes & Bladders, Fun Lung, My Little Kidney, Haunted Heart and the Placenta Playcentre. There were even crayons made from rendered human fat as well as authentic editions of the Operation Game and Girl's World.

But by far the most popular toy was Mr Liver Head, which was based on Mr Potato Head (see above and below). It quickly became so popular that a military curfew had to be imposed on overzealous young fans who would go to any lengths to acquire fresher, more impressive body parts to become the envy of their friends. 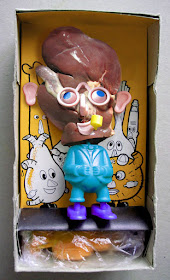