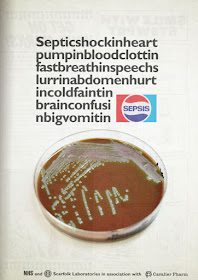 In the 1970s, the Notional Health Service envied those public sectors that received more funding from the government. The NHS was particularly resentful of the Department of Education & Indoctrination and in 1977 it set out to entice children away from schools and state-run brainwashing covens into hospitals so that it could justify larger budget requests.

The NHS initially launched a major campaign aimed at children and teens, which promoted the health benefits of serious medical diseases and conditions, especially those which required substantial financial resources. In addition to adverts in magazines such as Look-In (see above), it also produced collectable bubble-gum cards (see below), badges, T-shirts and cuddly toys that resembled bacterial cells and viruses.

While the idea of being dangerously sick did become very popular among the nation's school children (indeed, the Staphylococcus aureus flesh-eating disease playset was the biggest seller of Christmas 1978), it still wasn't enough to attract the desired funding to the health sector and in 1978 the NHS took the inevitable step of directly infecting its merchandise with actual diseases to ensure success. 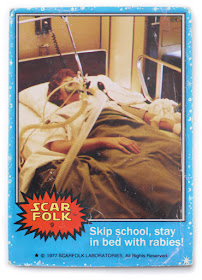 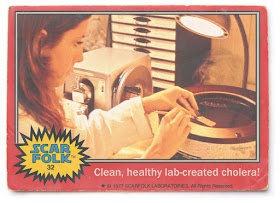