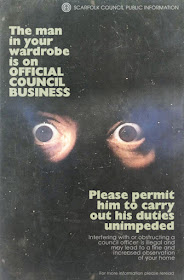 In 1973 there was an increase in complaints about odd, mumbling men appearing spontaneously in people's wardrobes. The council allocated funds to have them removed, but their efforts were in vain. No sooner had they expelled a 'wardrobe man' than another would appear in his place. Inexplicably, the men somehow found their way into residents' wardrobes regardless of how well doors and windows had been secured.

When the council realised that the wardrobe men's whispered mumbles were detailed (albeit slowed down, backward) accounts of what they saw and heard from their closeted vantage points, it quickly registered the mysterious men as state employees. Once a week, local council workers recorded the wardrobe men's accounts onto wax reels, processed the audio in vast laboratories and prosecuted residents who contravened any of the local laws, which changed almost daily.
Scarfolk Council at 15:49
Share