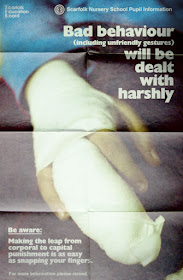 The Scarfolk Education Board was very keen on administering corporal punishment from the moment an infant entered the school system. Punishment was meted out for a wide range of misdemeanours including: 'being less than 5ft tall', 'not being able to clearly elucidate the works of Ludwig Wittgenstein via the medium of mime' and 'poor attendance due to injuries sustained as a result of corporal punishment'.

The reason for the early introduction of corporal discipline was to familiarise children with the idea of capital, or 'grown up', punishment and the fact that it was very expensive. Convicts were expected to meet the exorbitant costs personally, so children likely to commit capital offences were advised to start saving their pocket money from a young age. 'Execution gift tokens' were given at birthdays and Christmas by well-meaning grandparents, as well as given as prizes by schools for spying and reporting on classmates.
Scarfolk Council at 15:45
Share