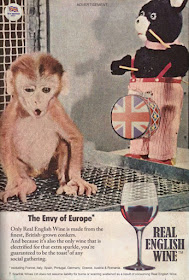 The government strongly promoted the ‘Buy British’ message in the 1970s. It was so keen to prove the scientific superiority of British products that large-scale experiments were commissioned.

Scarfolk University, for example, was given four million pounds to develop a computer that could record the brainwaves of hundreds of Real English Wine drinkers and then convert those brainwaves into sounds and images.

Scientists (and advertising agency executives who planned to exploit the results) predicted the result would produce “a wide variety of positive images, including majestic British landscapes accompanied by the sounds of waves and music as beautiful as anything written by maestros such Sir Edward Elgar or Cliff Richard”.

In actual fact, all the subjects’ brains produced exactly the same image: An electrified cage containing a baby monkey whose mind had been destroyed by medical experiments, systematic torture and the jarring sound of a toy mechanical bear mercilessly beating a drum 24 hours a day.

Despite this apparent setback, the Real English Wine committee ran with this image in their advertising campaigns. The wine sold well in Scarfolk, simply by virtue of being British, as did a spin-off ‘soft-toy’ monkey, which wasn’t actually a soft-toy at all, but a real dead monkey.
Scarfolk Council at 15:01
Share