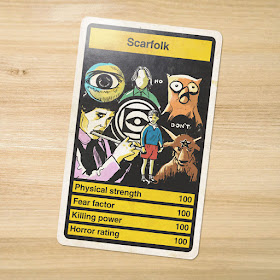 Many readers will remember the two packs of Horror Top Trumps, which were first issued in 1978. What is not commonly known is that the first pack was recalled after 3 days only to be rereleased a month later minus one card: The Scarfolk card.

The card had proved so effective that, not only could it effortlessly beat every other card, it also killed the losing player within moments of the game ending.

Learning of the inexplicable power of the card, the government immediately issued the recall, albeit not in the interest of public safety. Instead, it coerced citizens on welfare into playing the game during home assessment visits. The government also targeted enemies of the state, using the card in so-called 'black operations' at home and abroad.

In 1979, a catastrophe was narrowly avoided when the Scarfolk card was played in a game opposite a forgery of itself. Fortunately, the game's location was sparsely populated and the only victims of the resulting dark-matter explosion were a government agent, an unknown dissenter, seven ducks and, less significantly, four coachloads of orphans* who were driven to the remote site for reasons unknown.

*The orphans were children of disgraced artists, academics and other intellectuals who disappeared during the New Truth Purges of September 1977**.

** Edit: Apparently, according to fresh information, no such purges took place.