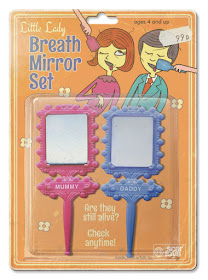 Apocalyptic toys were all the rage in the late 1970s, not that they were thought of as apocalyptic at the time. Citizens didn't fear their annihilation; they quite looked forward to demonstrating their 'Dunkirk spirit' with the misguided belief that it would somehow bring the country together. It didn't occur to them that their dogmatic nationalism might instead bring about the demise of the nation.

As the country moved toward collapse, social unrest and inevitable casualties increased. The paranoid state began anonymously exterminating citizens who so much as hinted at insurrection. Average (and the vast numbers of below-average) people were killed in street clashes between opposing factions and there were spates of frightened suicides.

Scar Toys exploited this expanding market opportunity and created a range of toys aimed at the many children in the process of being orphaned. One such toy, the Breath Mirror Set, aimed at young girls, was designed to accompany their more traditional beauty/vanity toys. The deluxe set (see picture above) included one mirror for each parent, colour-coded as per gender convention: pink for girls, blue for boys.

The wording on the back of the packaging encouraged children to use the mirrors beyond the death of their own parents. Included was a little booklet into which little pink stars could be affixed for every corpse that was identified using the mirrors. Highly sought-after prizes were awarded to the girls with the most stars and council archival documents reveal that the police turned a blind eye when gangs of little girls began slaughtering adults in frenzied attempts to accumulate more stars.
Scarfolk Council at 15:12
Share