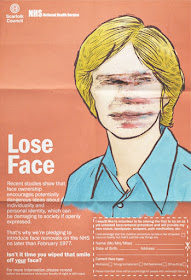 While some children were born without faces simply because they didn't deserve them (see the Scarfolk Annual 197X), the government became increasingly concerned about citizens who did have them. They found that people with faces are more likely to have personal desires, hopes and dreams, in short: a will and ideas of their own.

Such idiosyncrasies were not only thought of as needlessly self-indulgent, they were also deemed inconsistent with the smooth running of a successful society. Scarfolk's was the first council benevolent enough to offer face removals on the NHS.

In 1976, the council trialled face removals on stray foreigners, prisoners, children nobody wanted, unsuspecting people who were picked up leisurely walking in a park after sundown and volunteers (see leaflet above).

When the full scheme was rolled out in 1977, the council soon lost track of which faceless citizen was which. By 1978 a new law was passed which dictated that all faceless people were required to have a tattoo of their old face over their lost one to make identification easier.