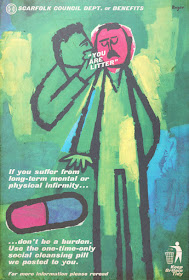 In 1972 the council outsourced its sick and disability benefits assessment service to a team of nightclub bouncers. The bouncers broke into the homes of claimants in the dead of night, shone lights in their faces and screamed threats at them.

Claimants who were identified as frauds were thrown down their own stairs, often repeatedly, to ensure that their physical and mental conditions matched their claims.

Genuine claimants were offered a menu of euthanasia options of varying price and bullied into choosing the most expensive, the so-called 'Kill Pill', which also contained a mild explosive (see poster above). However, claimants did have the choice to nominate another family member who could commit suicide in their place.

People who refused to take their own lives were officially recategorised as "potentially hazardous biological litter"; they were consequently charged with self-fly-tipping and taken away in vast fleets of skips on the first Monday of every month.
Scarfolk Council at 10:01
Share