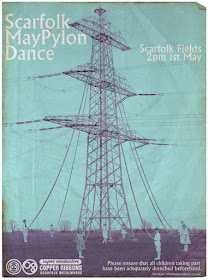 Only children whose parents had lost either their jobs or their lives were selected to take part in the annual Scarfolk Maypylon Dance. On the face of it, the tradition welcomed in Spring, but it was really just an exercise in cutting unnecessary welfare expenditure. Funds were rerouted to more important undertakings such as supporting the arms industry, which sold weapons to volatile nations that regularly threatened Britain with war.

Super-conductive copper ribbons were used during the dance because it was believed that their combination with 400,000 volts and expendable children opened a vortex to an alternate dimension where household items were always on sale and could be purchased for a fraction of the price. Items that were brought back through the vortex, however, risked corruption by dark forces, as witnessed on May 1st 1971 when Scarfolk was overrun by a vast horde of malevolent, sentient food blenders.