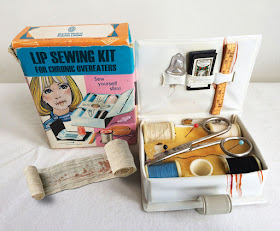 In 1970s Scarfolk, women over the age of 18 were legally required to be a certain weight and shape. If those who didn't conform to official regulations dared to go outside during daylight hours (assuming they had the appropriate free-movement paperwork), they were stopped on the street by police armed with tape measures, weight scales and portable plastic surgery instruments.

Because kerbside operations were frequently botched, many women went to drastic lengths to meet the government's slender ideal. An example of this was the Lip Sewing Kit (see above) which thousands of women received as Christmas and birthday gifts. It was also sometimes prescribed by doctors.

The kits had originally served a different purpose. They were the brainchild of a government welfare minister (and cotton thread magnate) whose department had previously used them to silence political prisoners and other enemies of the state. When the supply of all such people was exhausted, a commercial application for the product had been sought.