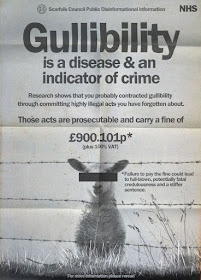 In 1976, the government informed citizens that gullibility was a contagious disease. The Dept. of Health warned that it was spread through the handling of so-called 'clever books' or by talking to people who were not approved by the state. Libraries, bookshops and schools closed overnight.

The department also disseminated the notion that gullibility could be inadvertently caught by coming into contact with airborne ideas. People were told to stay at home. One leaflet read: "All the information you will ever need will be presented to you via the state-controlled newspaper The Scarfolk Mail and the one and only state-run TV channel, which is decontaminated daily."

When the Dept. of Health realised just how successful the campaign was, it added that gullibility also led sufferers to forget serious crimes they had previously committed. This permitted the council to impose hefty fines and other arbitrary punishments (see poster above).