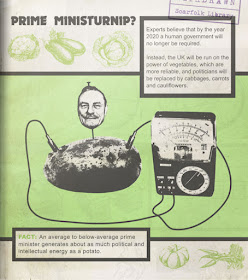 Many publications in the 1970s attempted to predict how we might live in the future. The above excerpt from the Children's Journal of Political Science & Catering showed that the state’s official soothsayers often came uncannily close to reality.

Scarfolk, which was among the most progressive towns in the UK, actually trialled a vegetable-based political system in the mid-1970s. Citizens could elect the vegetable that they believed would best lead the town. However, despite the wide range of vegetables and legumes available, the system was quickly reduced to a binary one when extremist pro-legume groups clashed with pro-tuber factions in political allotments and nurseries across the region.

Additionally, any vegetables considered to be of foreign origin were interned in farm camps, later to be deported.

Further reading. For information about the conversion of children into kitchen appliances, see 'Discovering Scarfolk' p. 121-123.