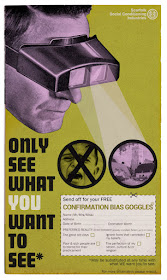 Confirmation Bias Goggles were the first wearable technology to be wired directly into the brain. In addition to the pinhead-sized speaker which perpetually broadcast the statement 'Of course you're right!' into the auditory cortex, the goggles' sensors could also switch off those parts of the brain that deal with troublesome emotions and feelings such as empathy, decency and healthy scepticism.

By tapping into the wearer's biases, the goggles literally deleted undesirable objects from the wearer's field of vision. Sights that were too dominant to be erased completely were visually falsified to validate the wearer's preconceptions.

By 1971, the state had adapted the goggles for use in schools. Children were told precisely what to think and what their personal opinions as adults would be.  Unsurprisingly, everybody who tried the goggles, without exception, thought that they were a great idea.