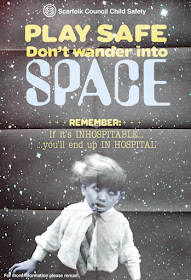 While the state frequently warned children about the dangers of playing on icy ponds, near electrical substations and in open-air, biological weapons laboratories, it failed to take into consideration the decade's plethora of science fiction films and TV programmes, which inspired space-themed games up and down the country.

Scarfolk children, who were known to take greater risks during play, initiated an unfortunate trend that started claiming lives. In 1977, two schoolboys from Scarfolk’s Junior Indoctrination Facility dared each other to endure the harsh extremities of space. Their corpses were eventually located drifting a few hundred miles from earth by tracking the surveillance devices that had been implanted in their frontal lobes at birth.

Concerned parents demanded that the state act immediately. Two years later, (and only after the government realised its child labour factories were losing a steady flow of under-10s), a public information campaign was launched which warned minors about leaving the earth's atmosphere (see poster above). Scarfolk Council also laid many miles of high-altitude, electrified fencing to repel innocent children who might unwittingly stray into outer space.
Scarfolk Council at 11:13
Share