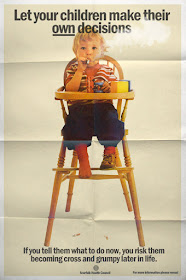 In 1978, Scarfolk Health Council launched a campaign which exploited people's fear of children (especially those with uncontrolled supernatural powers), to normalise the idea of letting kids do whatever they want without censure.

It was no accident that the infants in the campaign's various posters were depicted smoking, drinking and licking chocolate-covered asbestos.

A 1979 magazine interview revealed that the campaign had been privately funded by Mrs Bottomlip, a pensioner who worked in the local cancer charity shop on Scarfolk High Street. Her reasons were largely personal. Apart from the fact that she enjoyed her part-time job and "wouldn't ever want it to end because one meets such lovely people and it gets me out of the house", her son worked for a cancer research institute. Mrs Bottomlip was concerned that he, along with a whole generation of scientists and support staff, could find themselves out of work unless the number of people developing cancer was maintained, or preferably raised.

For her support of cancer research, the institute presented her with an award, which, unbeknownst to science at the time, was made from highly carcinogenic materials.