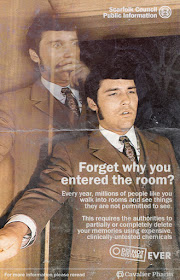 Just as Scarfolk Council demanded control over cultural memories and the historical narrative taught in schools, it also wanted to control individuals' memories.

To ensure a docile, compliant populace, Scarfolk promoted the idea of clumsy townsfolk forever stumbling into situations and seeing and hearing things they shouldn't, and proposed that measures be taken so that citizens only retained information that reflected the official party line at any given time.

Building on the success of the Black Spot Card campaign, potent, neurotoxic chemicals (and, in some cases, a steel truncheon) were employed, according to one leaflet, to: "cleanse unnecessary or redundant memories, so as to unclutter the mind".

The campaign and treatments were so effective that some people became inexplicably afraid not only to go outside but also to go into rooms in their own homes in case they saw or overheard something forbidden.