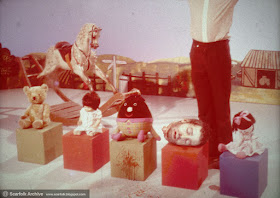 Clay Stool was a daytime children's TV programme which we introduced a while back (you can listen to the theme tune here).

Many readers will remember the programme's cast of toys (see above), some of which became stars in their own right: Big Ted, Hamble, Humpty and Jemima.

Many, however, have forgotten 'Little Head', who only became a regular due to a typo on the programme's props list, which was supposed to have requested 'Little Ted'. Production staff were still frantically looking for an appropriately-sized head literally minutes before the programme went out live. A quick-thinking studio manager (who some believe was telekinetically controlled by Hamble) ended the panic by decapitating one of the cameramen, who had been scheduled for ritual recycling anyway.

Producers hoped that children wouldn't notice that Little Ted had replaced Little Head in the following week's episode, but they did. Thousands wrote in demanding that Little Head be reinstated.

Little Head eventually received his own line of merchandising (including a very popular biscuit barrel). He went on to host a Saturday evening primetime show, which involved an electric current being passed through his cranium and him yelping out the names and addresses of people who, in his opinion, did not deserve welfare payments.
Scarfolk Council at 14:49
Share