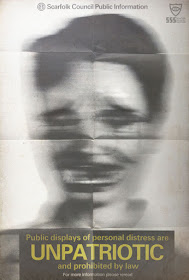 In Scarfolk, public displays of emotion were governed by draconian laws. Negative or even ambiguous feelings (such as curiosity and hesitation) were deemed seditious and on-the-spot fines and punishments were often meted out by police (and by the Council Christmas Boy during the season of good will).

Distress (see poster above), a broad term which included "psychological breakdown", "suffering personal injury or attack" and "tutting in a queue at the post office", was considered to be a criticism of the state and therefore treasonous.

The only emotional expression truly free of censure was, according to government guidelines, "an abiding, unmistakable demonstration of pride in Our Joyous State (even if that demonstration requires the forfeiture of one's pride - and/or physical body - for the sake of Our Joyous State)". By 1979, feelings such as scepticism and doubt had been declared acts of terrorism.

These laws permitted police to cast a wide net in their investigations and arrests. Even if citizens did manage to pass the stringent, invasive contentment examinations they were still eligible for arrest if their pets exhibited negative emotions. Records show that many people were detained because of their sulky dogs and there was even one case of an arrest due to a livid tortoise.

See also The Anti-Weeping Campaign, which was aimed at children.
Scarfolk Council at 12:12
Share