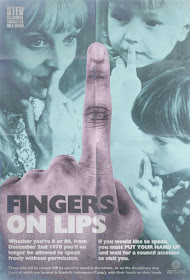 Crime in Scarfolk did not rise substantially between 1976 and 1977, largely due to the latest in thought detection techniques* and random public executions. The government, however, did announce that there had been a significant increase in naughtiness.

Many citizens criticised the state for treating them like children. The council denied this but in January 1979, thousands received orders to put 'fingers on lips' while in public. Scarfolk fell silent.

Specially trained police officers patrolled streets, public and private buildings, and handed out on-the-spot fines for various misdemeanours such as not standing up straight, running in corridors and not paying attention. At the officer's discretion, the fines could be substituted for corporal punishment with a slipper, belt, cane or rabid Alsatian.

By the summer of 1979, the scheme was in chaos: So many people had been sent to 'stand in the corner' that a new, much larger corner had to be built - at a cost of £2 million - to accommodate the cramped detainees. In August alone, 94 people died after they raised their hands to go to the toilet but were not given permission. They had simply been forgotten.

At the end of the decade, the council decided that because of a small handful of troublemakers, the whole town would have to be punished: Everyone would have to resit the 1970s.