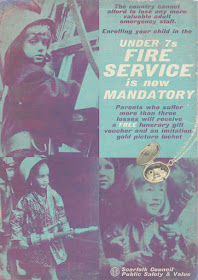 The Under-7s Fire Service was one of several children's emergency services in Scarfolk. There was also a mountain/volcano* rescue team and an SAS-style toddler regiment. The children received little training but they did get a lolly if they were good and/or survived their first week of active duty.

Enrolment in such organisations became mandatory when a government study revealed that parents were only putting forward their least favourite children. This was a serious issue for the government because it diverted workloads away from, and reduced target quotas of, state child recycling facilities, which had been set up at great cost to deal specifically with processing unwanted, less-valuable offspring.


* Many children were sent to work at Lavaland.