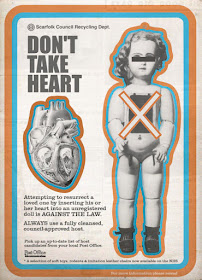 A 1973 county survey showed that, after all deaths and births had been accounted for, there was a surplus of citizens, approximately 665 in total.

This was due to the practice of inserting deceased people's hearts into inanimate objects to bring them back to life. Grieving family members were most likely to attempt the process but there were also a few hobbyists and human traffickers.

Once the heart had been placed in its new host body, over which a medi-legal incantation had been recited, the object would become imbued with the personality of the deceased. However, there were often side effects, for example not being able to say certain words such as 'artichoke', 'help' and 'please kill me, I did not give my consent for this', to name but a few.

Hearts were usually placed inside humanoid objects: dolls, mannequins, large soft toys and the like, though one widow had her dead husband's heart inserted into a guinea pig called Jonathan who flushed himself down the toilet after his application to do an MA course in Linguistics was rejected.